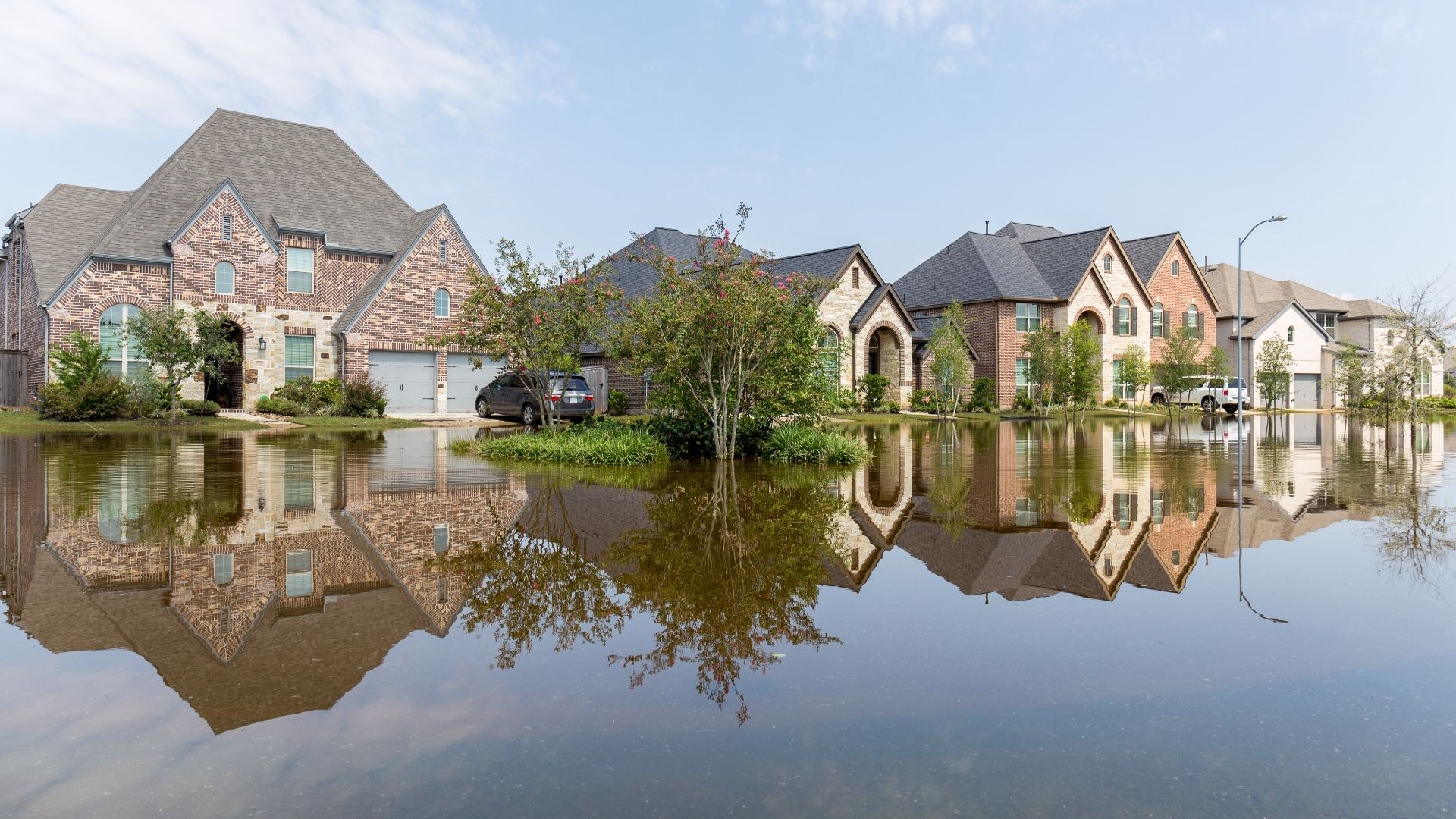 Let’s take a look at some of the different types of flood barriers you can use to protect your home or place of business.

Door barriers, also known as flood panels, are solid metal shields installed in front of doors to prevent flooding inside of a home. Flood panels are a temporary form of flood barrier that can be deployed in advance of a severe weather event.

Although door barriers can protect water from seeping through your entryways, remember that water doesn’t need a welcome mat to enter your home. If you live in a floodplain or coastal area prone to flooding, make sure to seal your basement walls with waterproofing compounds. Ensure that your gutters are clear and working properly. If you live in an area that floods regularly, consider installing a sump pump.

Sandbags are perhaps the most common form of flood barrier, but they’re not typically the most effective.

Walls of sandbags can redirect floodwaters away from homes. However, the effectiveness of sandbags depends on how well they have been filled and laid. Even if they’re deployed properly, sandbags cannot guarantee complete flood prevention—some amount of water will usually seep through.

Sandbags are best used in conjunction with other flood control solutions. They can be your first line of defense in case of an emergency, but they shouldn’t be your last.

Flood barrier walls are similar to sandbags but typically more effective. TrapBag® is a form of flood barrier wall. Our bags are designed to protect against flash flooding, mud and debris flows, storm surge, and more.

TrapBag® flood barrier walls consist of pentagon-shaped bags that can be filled with sand, washed gravel, or concrete. The bags, made of high-strength textile, are connected on the side to one another like an accordion and can be collapsed for storage. They use 40% less fill material than a stacked sandbag wall without decreasing their effectiveness. In fact, one 100-foot section of four-foot-high TrapBag® flood barriers can replace nearly 8,000 sandbags.

TrapBag® flood barrier walls are designed for rapid deployment as well as permanent installation. They last about five years and can be installed in case of an emergency. TrapBag® can also be used to stabilize sandy environments, contain stormwater, and protect your home from the effects of erosion. 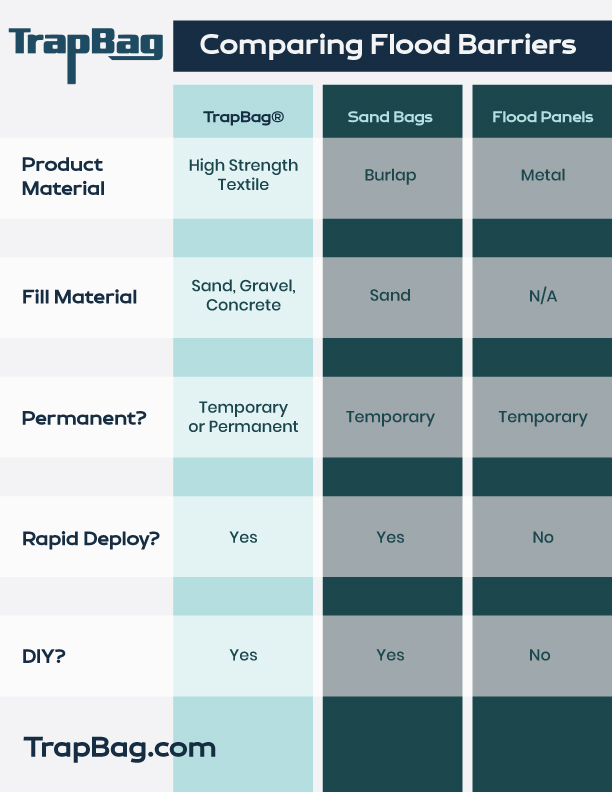 DIY Flood Barriers for Your Home

In an emergency, you’ll want an easy way to set up your own flood fighting methods to protect your home. If you’re looking for a DIY flood barrier for your house, sandbags and TrapBags® are your best bet. Sandbags and TrapBags® can be deployed rapidly in emergency situations to protect your home. Make sure to overlap your sandbags as you stack them in a stair-step pattern to prevent water from seeping through as much as possible. Having sandbags or storage-friendly TrapBags® on hand is a great way to prepare for a major flood if you live in an area prone to flooding. 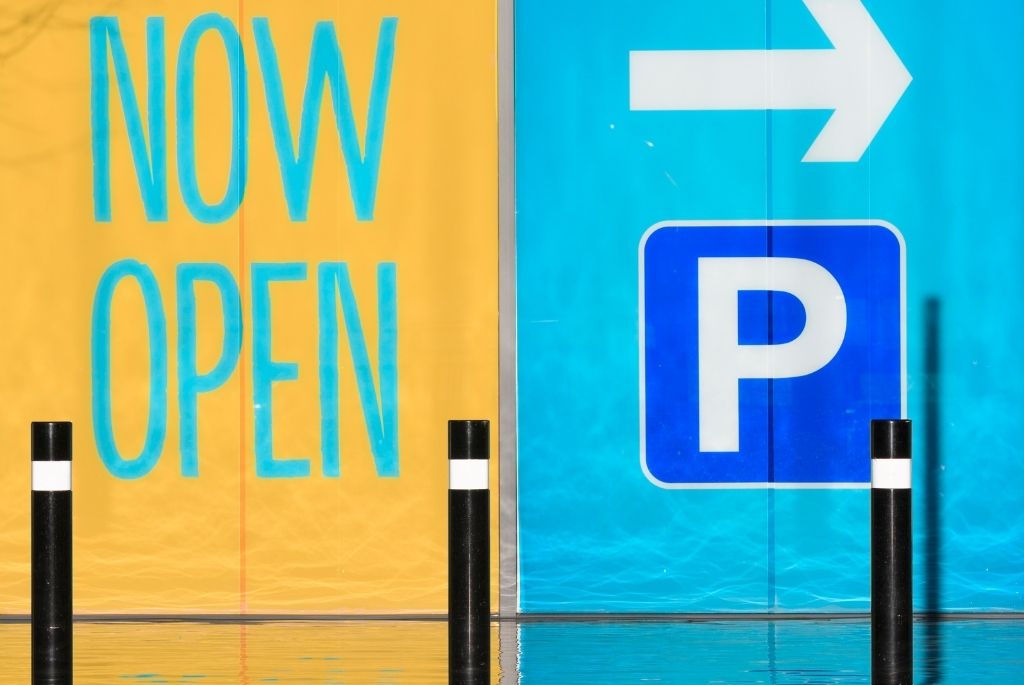 These stronger forms of flood protection are a great option for protecting commercial sites from flood damage. Dams retain water temporarily or permanently by creating a barrier that cuts through the water. Dikes are ridges that regulate water levels by running parallel to existing bodies of water. Levees are embankments that prevent flooding due to excess rain or snowmelt.

All three of these commercial flood barriers can be built with or enhanced by using TrapBag®. TrapBag® can increase the height of a dam or levee or increase the length of a dike.

Flood gates are a great solution for vehicle entrances, ramps, and other large openings that could be damaged by flooding. Flood gates are also commonly used by municipalities to prevent floodwaters from overwhelming the city’s sewer system. They can also be used to contain spills in outdoor settings.

Water-filled flood barriers divert water away from buildings, just like more conventional sandbags. However, instead of consisting of smaller bags piled on top of each other, self-filling water barriers are long, large, singular bags filled with water, not sand or gravel.

These aren’t very effective on muddy, sloped surfaces. Additionally, because they are filled with water, you have to be careful not to burst them. With a sandbag or TrapBag® barrier, one bag can burst or be defective without decreasing the overall effectiveness of the barrier. On the other hand, because water-filled flood barriers typically consist of one or two large bags at the most, product failure, bursting, or puncture can completely eliminate its ability to protect against flooding.

TrapBag® can be effectively deployed to protect commercial property just as well as residential homes. Because they are so quick and easy to install, they are a great method of protection against anticipated storm surges. For example, after Hurricane Sandy, the NYC Parks Department installed TrapBag® barriers to protect the area from future storm surges.