A seawall is a type of shoreline hardening that is designed to protect property from shoreline erosion. Seawalls are typically made of hard materials including concrete, rock, and wood.

Seawalls have their pros and cons. For example, seawalls can also lead to worsening erosion known as “accelerated erosion.” This type of erosion happens faster and more severely than natural erosion. Attempting to install your own shoreline erosion control methods may cause more damage than it prevents — and, depending on your region, it could be illegal. Make sure to check your state’s guidelines and permit requirements.

In Understanding, Living With, and Controlling Shoreline Erosion: A Guidebook for Shoreline Property Owners Third Edition, experts state: “many erosion control projects which have been constructed are either inappropriate or ineffective…” (The Tip of the Mitt Watershed Council, 2019).

How effective are seawalls?

How much does a seawall cost?

Learn more about our solutions. 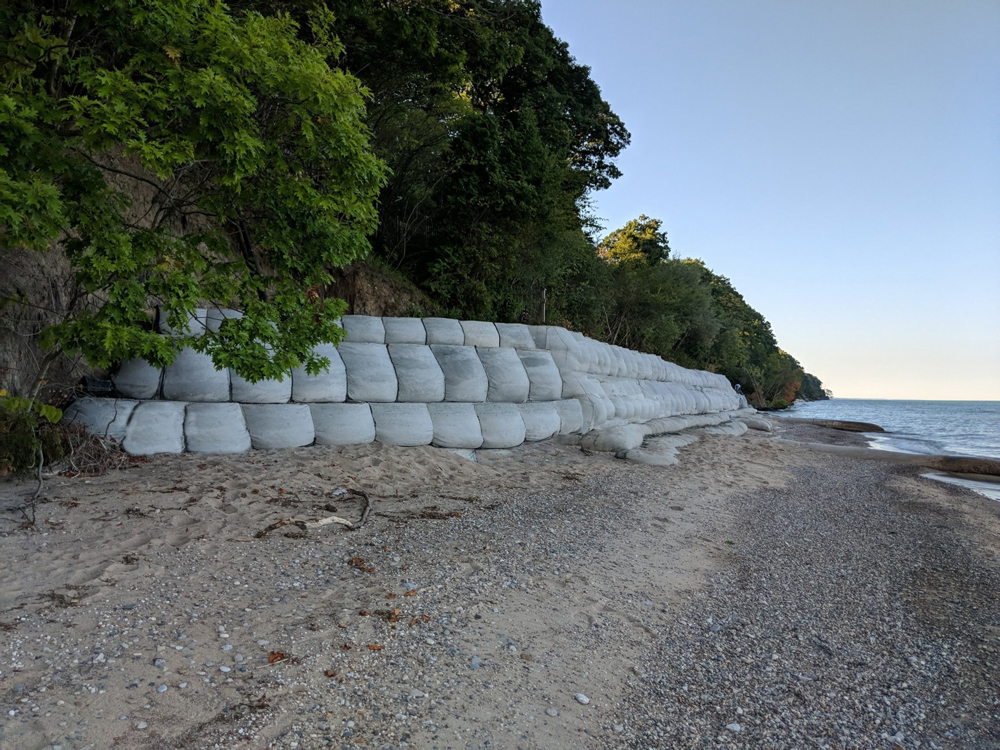 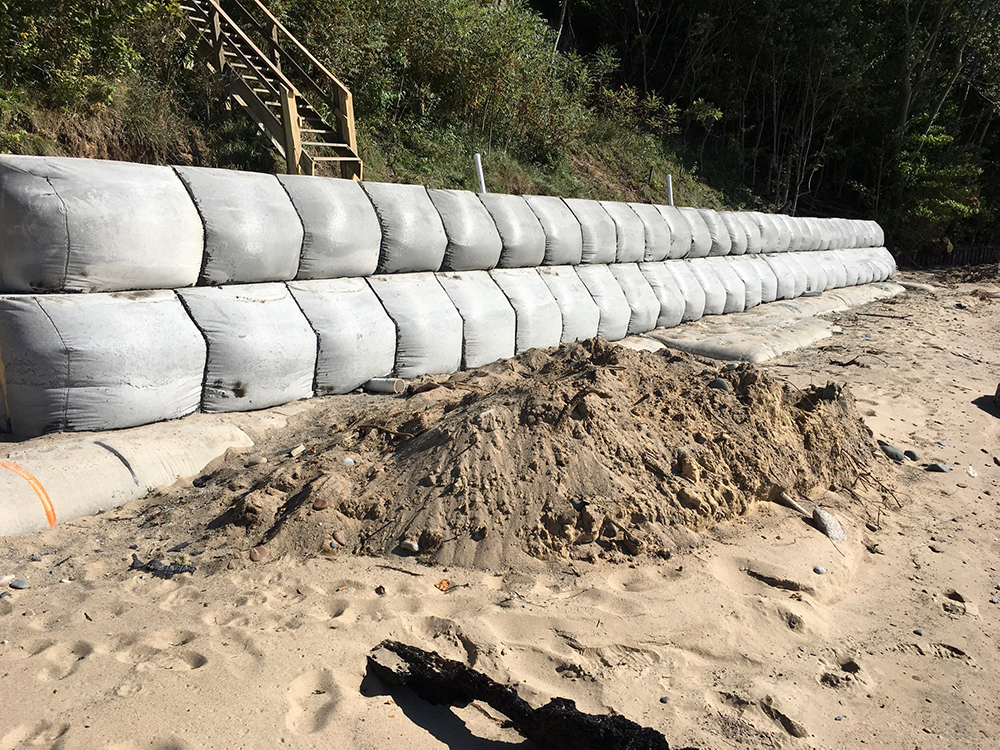 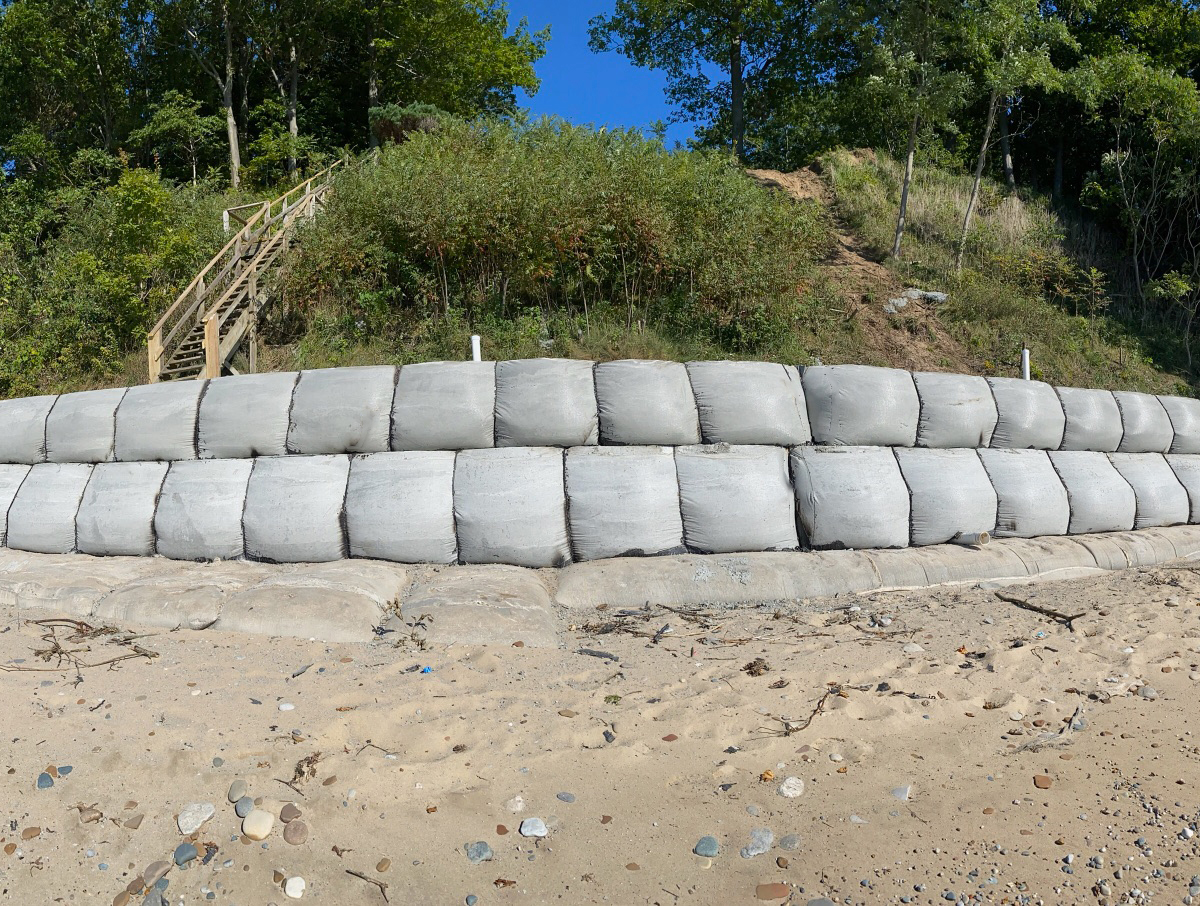 How effective are seawalls?

While seawalls can be effective at protecting the shore from wave erosion in the short-term, in the long-term they create more issues than they solve.

What are the disadvantages of a seawall?

Seawalls block the absorption of wave energy. This means that when a wave hits a seawall — instead of natural vegetation or sand/soil — the energy is deflected rather than absorbed. The energy does not just disappear, it is redirected elsewhere.

Wave energy deflected by a seawall is redirected in two possible ways. The first is downward. This creates an event known as “scouring.” When wave energy is deflected downward towards the lake or sea bottom, it scoops out the soil. Eventually, scouring causes habitat loss. It also renders the seawall completely ineffective because, when the water becomes deeper, waves are able to undercut the seawall. Long-term effects include more algae and cloudy water.

The second way wave energy is redirected after hitting a seawall is called “wave flanking.” Wave flanking is when the energy is directed sideways. The energy moves towards neighboring properties and homes where it causes accelerated erosion. This in turn creates a domino effect. When one homeowner decides to install a seawall, they are essentially forcing their neighbors to do the same until everyone in the area is forced to install an expensive and mostly ineffective unnatural barrier. The lake or sea suffers and the seawall eventually fails.

In order to ensure you are being responsible with your seawall installation, consult the U.S. Army Corps of Engineers as well as a professional team before starting your project. The U.S Army Corps of Engineers has plenty of resources and documentation that can help you decide which type of shoreline protection will be most beneficial to you and least harmful to neighbors and the environment.

How long does a seawall last?

Depending on the type of seawall, the area where it’s installed, and the materials used, seawalls can last between 20 and 50 years. If the seawall is not maintained, however,  it will fail much sooner.

The TrapBag Fabric Forming System is what is used to create the seawall. The material the TrapBags are made out of has a life of at least five years but when you install a TrapBag seawall you remove the TrapBag material once the concrete cures. A finished TrapBag seawall will look like the attached photos (concrete blocks tied together with cables). This type of seawall can last just as long as a typical seawall and maybe longer.

To install TrapBags® to protect your property from shoreline erosion:

To install TrapBags® to protect your property from shoreline erosion:

Check out the video below to see how TrapBag® was installed along the Gulf Coast in Southwest Florida for erosion control.

How much does a seawall cost?

Seawalls typically cost about $150 per linear foot. This of course depends on the materials used.

Cost will vary depending on the type of seawall system that is needed. We provide the TrapBag® Fabric Forming System and all of the geogrid, geotextile, cables, and dowels needed for the job. All other cost will be given by the contractor to perform the installation. (labor cost, concrete cost, etc.)

Can I use bags of concrete for a seawall or retaining wall?

TrapBags® as a material for seawalls?

TrapBag® is a series of pentagon-shaped bags that are sloped on one side, vertical on the opposite side and open at the top for filling. Each of the cells are connected side by side like an accordion, each cell has a common wall with the next cell, and are collapsed during storage and deployment. The cells are made of high-strength textile. Each of the cells are self-contained yet rely on the next cell for added strength. If one of the cells is compromised, it will not affect the rest of the barrier, which will remain standing strong.

You can't always predict,
but you can always be prepared.