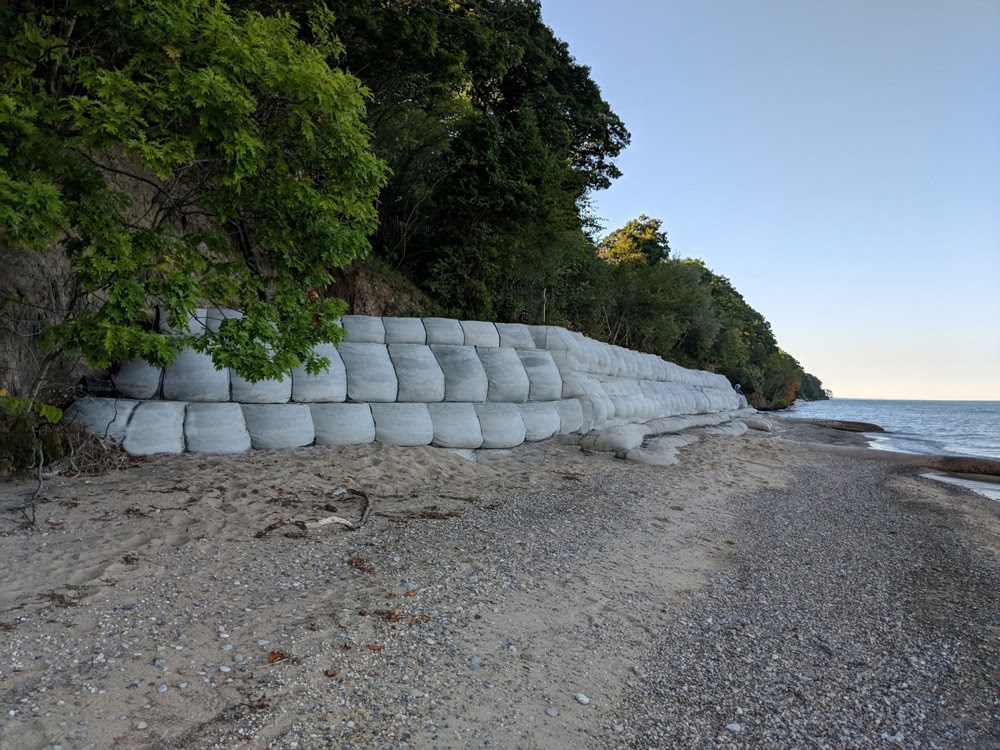 Erosion on the Great Lakes Shorelines

Erosion on the Great Lakes has been an increasingly prominent issue lately, especially beach erosion. This is due to issues like strong winds, high water levels, and forceful waves. What can we do to prevent, avoid, and mitigate any further damage from taking place? Are there any projects that could have the ability to garner enough success that we can eventually regain some control over beach erosion?

Why is Great Lakes Erosion Happening?

Many factors impact erosion on the Great Lakes shorelines. In general, Great Lakes beach erosion is the consequence of storm surges and wind moving materials from the shore further out into the water. The energy that comes from these surges builds waves which temporarily changes water levels and inevitably causes damage to the shoreline.

Fortunately, Lake Michigan erosion and Lake Superior shoreline erosion have been more minimal than other Great Lakes due to their already shallow waters. There is much speculation as to what may be causing the increase in Great Lakes beach erosion, but changes in weather and climate may have more to do with it than we initially thought.

How Bad is Erosion in the Great Lakes?

Erosion on the Great Lakes is likely going to continue getting worse before it gets better. As of now, there have been billions of dollars in damages to these shorelines, with experts assuming that climate change is only going to increase this. Erosion mitigation strategies are in the works in all of the Great Lakes states, but there is a lot of money required to repair the damage.

Which Lakes Have it the Worst?

Lake Michigan beach erosion may not be as bad or extensive as other beaches, but the water levels on the lake have been breaking records over the years. Add that on to volatile weather conditions, and the shoreline could take damage too extensive to repair. However, thanks to shallow waters, the eroding beach is easier to control.

Lake Superior erosion is not quite as bad as other Great Lakes, but it is still taking some damage. The minimal amount of damage is most likely occurring thanks to the seasonal decline in the water levels amid already shallow waters. The real danger and erosion damage comes from ice that forms along the Lake Superior shores which, if not dealt with, causes extensive beach erosion.

The Lake Erie shoreline is susceptible to waves, wind, ice, and the impacts of gravity on the beaches. The Lake Erie coastal erosion area is very dependent on local weather conditions and patterns. All of the different zones are impacted differently by erosion, and the extent of the damages tends to vary based on this.

Beach erosion on Lake Huron has been more extensive than other eroding shorelines among the Great Lakes. Rising water levels have caused damage to properties and shorelines along Lake Huron, even going so far as to destroy some spots. The majority of businesses, homes and other buildings around that area have since moved or evacuated due to the extent of the erosion.

Lake Ontario erosion has been pretty extensive in terms of damages as well. The Moses-Sanders dam is currently preventing as much water from flooding the Lake Ontario area as it possibly can. This means that the area is in constant danger of more damage. Any more water getting through can lead to insurmountable erosion damage.

How do Beaches Erode on the Great Lakes?

Beaches along the Great Lakes erode due to changing water levels. The process is also known as “sand starvation.” When the ratio of sand going out from the shoreline is no longer the same as the amount coming in, the beaches begin to diminish or erode. Since water levels have been changing so much recently, shoreline erosion on the Great Lakes is taking place rapidly.

It is also important to note that the change in climate conditions has impacted beach erosion significantly. Changing weather conditions cause a change in water levels and water patterns, which eventually leads to shore damage. Without taking steps to improve upon climate change, fixing this problem may not be easy.

Recreational uses are already taking a hard hit from eroding shorelines as well as property values. If we continue to lose these beaches without implementing severe coastal erosion management processes, we could lose the shorelines for good. Not only would we lose the beaches altogether, but people’s homes and livelihoods could face detrimental consequences which can have serious impacts on the economy of the Great Lakes areas.

Shoreline stabilization methods exist as a way to attempt to control erosion. The way this typically tends to happen is through structures that line the shores in a parallel fashion to try to protect the banks and soil from unruly waves and currents. Lake shoreline stabilization can include the addition of these structures, bulkheads, and revetments. Taking efforts to stabilize the shoreline can slow down the effects of beach erosion before it gets too out of control.

Historically, how has Lake Erosion Been Controlled, and are the Methods Effective? 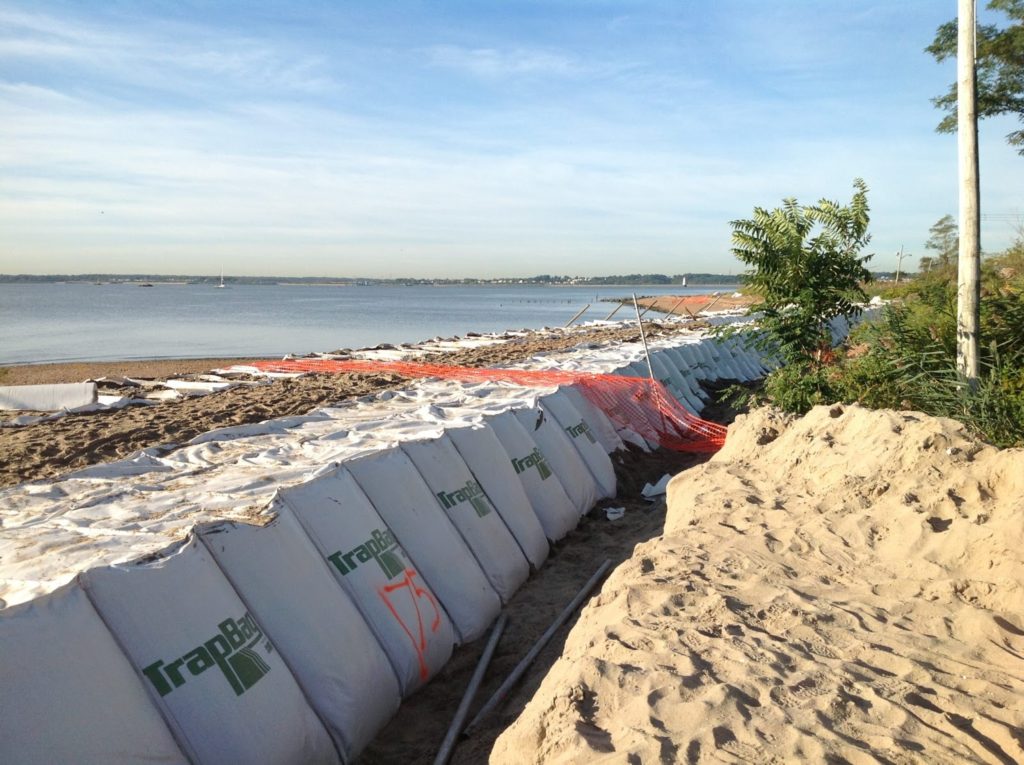 There are a few things that people can do in an attempt to control the amount of erosion. The ways to prevent shoreline erosion include seawalls, vegetation, fencing, revetment, beach renourishment, and geotextile barriers. Let’s explore some of those options more in-depth to attempt to gain a better understanding of how to control erosion.

A seawall is a structure made from concrete, steel, boulders, or wood that lie parallel to the beach at its interface. Professionals also refer to seawalls as bulkheads or revetments. Seawalls create shore erosion protection by forcing sand to cease its natural movement caused by waves. They can temporarily hold back the water. Unfortunately, seawalls can force other areas to take on erosion in places without them due to poor construction practices.

Another form of coastal erosion management is the addition of vegetation. You can use shrubs, trees, and groundcovers to attempt to diminish erosion caused by surface water and coastal issues. A combination of trees and plants protects the soil while forcing the water out during various months throughout the year. This option poses the smallest conflict as the addition of more plant life helps bring about new life and growth.

To prevent erosion on the Great Lakes, fencing is an option that many use to keep soil from taking on damage due to water erosion. Typically, wooden fences will line the areas that need to be protected. Placing the poles near each other creates a barrier to protect the soil from as much water damage as possible.

A way to enhance beach sand protection is to utilize a process known as beach renourishment. This is the process of placing sand on eroded shorelines to attempt to maintain the amount of sand that exists. This is ideal when dealing with storm surges and erosion that take place slowly over time.

Lakeshore protection is possible with the use of geotextiles. A geotextile attempts to control the amount of sediment that passed through without causing a decrease in the water. Over time, particles will accumulate on the geotextile, which can impact the flow of water, leading to further damage to the barrier.

TrapBag Barriers are a low-cost, rapid deploy flood and erosion control barrier bag similar to, yet superior to, conventional sandbags TrapBag Barriers can be filled with sand, gravel, or concrete. When you fill them with concrete you create a TrapBag seawall which in most cases creates a permanent solution.

What can Homeowners and Property Owners do About Erosion?

If you are looking into purchasing a home on a Great Lake or any lakeside home, or if you already own one, understanding what causes lake erosion can save you a lot of future trouble. When the weather is particularly wet, rain and water levels will remove large amounts of sand and soil from shorelines into the water, which causes shoreline damage quite quickly.

Luckily, if you live on a Great Lake and have to deal with erosion, chances are your HOA or insurance has handled the problem before and can help you. Adding vegetation is the first solution you should try if the erosion begins to take over. Vegetation is more challenging to erode than sand and soil because the roots keep them locked in more firmly. Vegetation also helps the environment by providing homes to animals and increasing the circulation of oxygen.

It is generally not a good idea to attempt to install a bulkhead on personal property to mitigate erosion damage. Bulkheads require a specific setup and can easily take on errors during the installation process. If you do not build a bulkhead the correct way, the chances are good that it will not hold up and eventually will cause more erosion. Bulkheads are an excellent option for beaches and public land, but you should not attempt to create one on private property or your own.

If you have more questions about erosion control, contact us today and we’ll be happy to help you find the right solution for your unique situation.