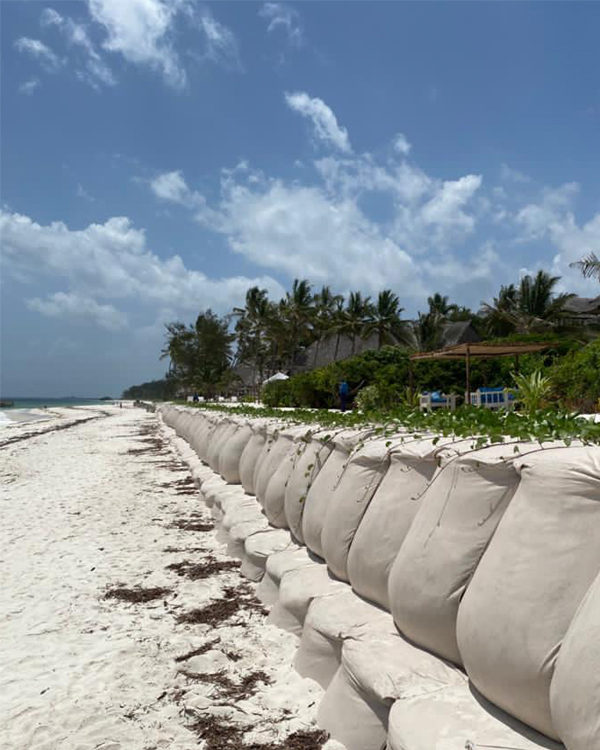 Soil erosion is the bane of agriculture. It is a heavy threat to environmental productivity and sustainability, with effects on food security. Every year, 12 million hectares of fruitful land are lost to erosion globally, and the value of 33% of soils is now believed to be reduced.

In Africa, soil erosion and desertification is a rampant environmental problem. There are several factors, both natural and human-related, that induce erosion. However, all hope isn’t entirely lost. To aid erosion protection and fight against desertification, workers can put in place sustainable land management and systems.

Erosion is a major environmental issue confronting water and land resources in Africa. Though erosion is a natural process, it is drastically decreasing land productivity. Moreover, it heavily affects farmers who work on hillside plots or those downstream.

Why Is There So Much Erosion In Africa?

Several African countries suffer from a shortage of food and fuel supplies due to erosion. It can also contribute to climate change. Several factors exacerbate erosion in Africa; humans have a hand in these factors, and so does nature.

The effects of climate change include rising sea levels, a combination of higher temperatures, intensifying storm surges, and more. These effects will worsen erosion which Africa is already suffering from, and heighten the vulnerability and exposure of people and assets.

Where is Erosion Happening in Africa?

Many African countries suffer from degraded soil. Degraded soil reduces food production and leads to soil erosion and desertification in Africa. This is difficult since thousands of people depend on the produce of the land for their livelihood.

Many areas in the continent that suffer from erosion and desertification include the Central African Republic, Ethiopia, Senegal, Sierra Leone, Liberia, Guinea, and Ghana. There is also soil erosion in South Africa, Nigeria, Zaire, Mauritania, Niger, Sudan, and Somalia. 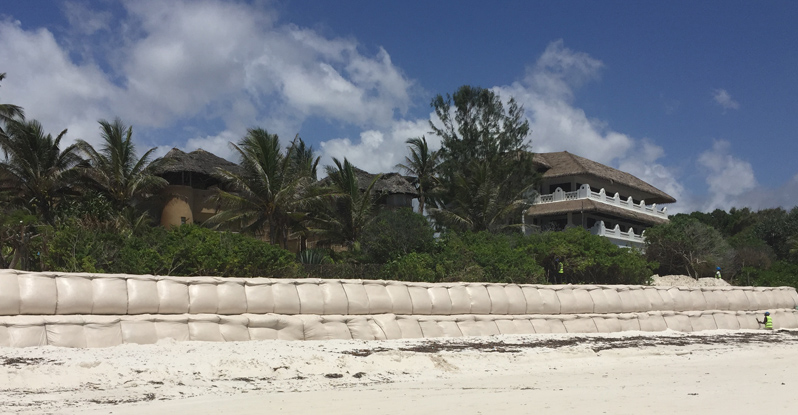 What is Soil Erosion?

Soil erosion is a process that happens when the impact of water or wind removes soil particles or detaches them as a causal effect of soil deterioration. In some areas, erosion can be so intense that the land eventually gets abandoned since it cannot be cultivated.

Soil erosion makes room for several environmental problems that heavily affect land productivity and food security. Some of the impacts of soil erosion include:

Soil erosion reduces soil fertility, which affects crop harvests. It also carries soil-filled water downstream, which builds up thick layers of sediment that can affect the smooth flow of streams, leading to flooding. Also, as the years go by, the sediments can change the course of the river. Ultimately, this leads to floods which destroy life and property.

Additionally, soil erosion washes away the fertile topsoil. The infertile soil left behind cannot support the growth of trees, so they eventually die out. Since trees help prevent floods as their roots hold on to the soil, an absence of thick vegetation and trees leads to floods.

The negative effects of soil erosion by water go beyond washing away valuable topsoil. It also affects crop emergence, growth, and harvest directly by the loss of nutrients and fertilizers. Simply put, seeds and plants can be affected or completely wiped out by erosion.

The impact of soil erosion can be very serious, as it not only leads to flooding and crop loss but also reduces water quality. Soil erosion causes pollution and sedimentation in rivers and streams, as the soil begins to clog these waterways and kills off fish and other species. Also, nitrogen and phosphorus get swept away from topsoil and eventually get washed into the water, ultimately reducing the quality.

Desertification is the gradual process of land turning into a desert as the nutrients in the soil decline as time goes by. It’s important to note that soil erosion is a process of desertification. Usually, it involves reducing nutrient-laden topsoil, leaving rough, sandy particles that can’t retain water. As a result, those lands that are not suitable for plants to grow will finally turn into a desert.

Causes of Soil Erosion in Africa

Soil erosion in Africa is a consequence of unsustainable usage of land and other disruptions. Some of these factors that give rise to soil erosion include:

Deforestation is the decrease in forest areas due to urbanization, agricultural croplands, or mining activities. Deforestation has been negatively affecting the natural climate, biodiversity, and ecosystems. When deforestation takes place, tree areas are considerably thinned, causing erosion to take place. When this happens, you see land swept into streams or river beds.

When farmers convert natural ecosystems to pasture land, it doesn’t damage the land as extensively as crop production. However, it can increase the rates of erosion and aid the loss of topsoil and soil nutrients.

Inevitably, overgrazing reduces ground cover, giving room for erosion and constriction of the land by rain and wind. This makes it hard for plants to grow and water to seep into the soil.

Fertilizers, pesticides, and other chemicals used on crops have helped farmers to increase harvests. However, overuse of some of these chemicals interferes with soil composition and affects the equilibrium of microorganisms. In addition, fertilizers can destroy the soil, leading to reduced plant growth and eventual erosion.

Some other causes of soil erosion include over-harvesting, mining, forest fires, and uncontrolled fires for hunting or agricultural hunting.

Though erosion is a terrible occurrence, it is not outrightly impossible to combat. For erosion protection in Africa, there are soil erosion control methods and techniques that farmers can use to change the course of events. Some of them include erosion control bags and barriers. 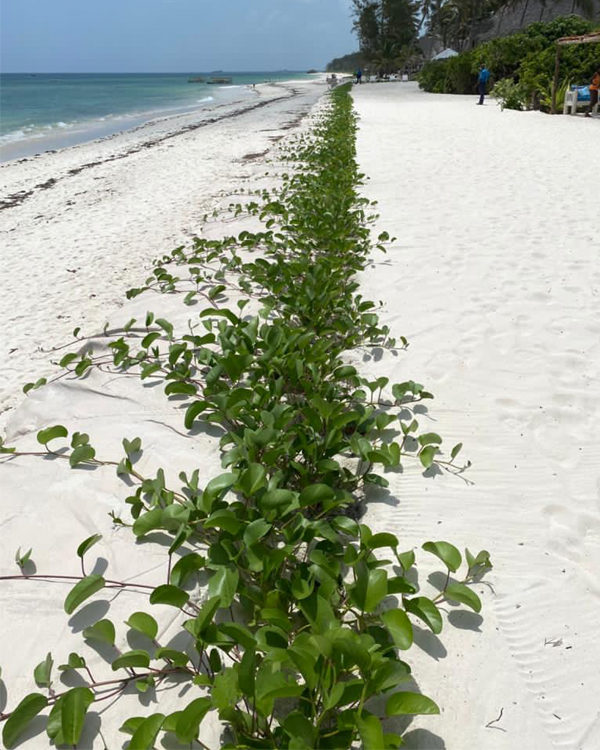 Erosion bags are foreign ideas to many individuals. Basically, erosion control bags function to dewater or remove sediment from water. These bags work as an erosion control barrier in that they trap sludge and sediment, ensuring that only clear water flows through. Erosion control bags are best on used shorelines; to trap in the sand and particles, you need to prevent shoreline erosion.

How Do Erosion Bags and Barriers Work?

Farmers arrange erosion bags and barriers across the shoreline or the desired location. This is set up so that bags or barriers can filter the water and soak up the dirt and soil during erosion, thereby cleansing the water.

On roadsides, they are used to prevent the road from collapsing. On beaches, they function as temporary groynes, headlands, and more. Erosion bags come in different shapes and sizes depending on the need.

There are a variety of erosion bags that people can use to trap sediment and sludge at the farm, beach, or the desired location. They include:

As implied, these kinds of bags are filled with rocks in different small shapes and sizes. The bags can be mesh, burlap, or plastic. They are also heavy-duty and very resistant to UV rays for a longer usage duration. Rock bag erosion control is no doubt a step in the right direction.

This type of erosion bag is filled with the desired amount of gravel. It can either be large or small, depending on the needs of the user. Gravel bag erosion control is also durable, affordable, and effective.

Sandbags are filled with large or small amounts of sand, and they are used to either block and filter away sediment for the desired area.

The inlet protection snake bag is designed to be filled with gravel or sand. Workers use it for erosion control around roadways, inlets, and other nooks. The heavy-duty snake bag can be used repeatedly as it protects against UV rays.

TrapBag is the most suitable for erosion. TrapBag control barriers are affordable, durable, and rapid-deploy erosion bags. It is similar to the regular sand or gravel erosion bag methods but is a lot better as they are versatile and can be used to protect life and property.

How TrapBag Can Prevent Soil Erosion

The following are ways that TrapBags can be used to prevent soil erosion.

In the case of farming, these TrapBags are filled with sand, rock, or gravel. They then are stacked around a field with cultivated crops and other valuable areas such as a piece of land. These bags immediately take up the job of protecting the area from erosion.

To protect coastal shorelines, one of the best products to use are TrapBags. They are placed along the shores to help collect soil and curb any future erosion. In addition, they serve as a natural barrier to protect the shoreline against storms and erosion.

Erosion along shorelines, riverbanks, or creek banks can be damaging to life and property. However, to properly stabilize the riverside, many methods are available, including using synthetic material, geotextile TrapBags, or simply planting vegetation.

Soil erosion is a major problem. However, with erosion protection in Africa, several methods can combat this age-long bane of agriculture. With TrapBag erosion bags and erosion barrier installations, we can easily protect life, land, and property from the terror of erosion.

To keep your farm, shoreline, or riverbank safe, browse TrapBag erosion control barriers or contact us!