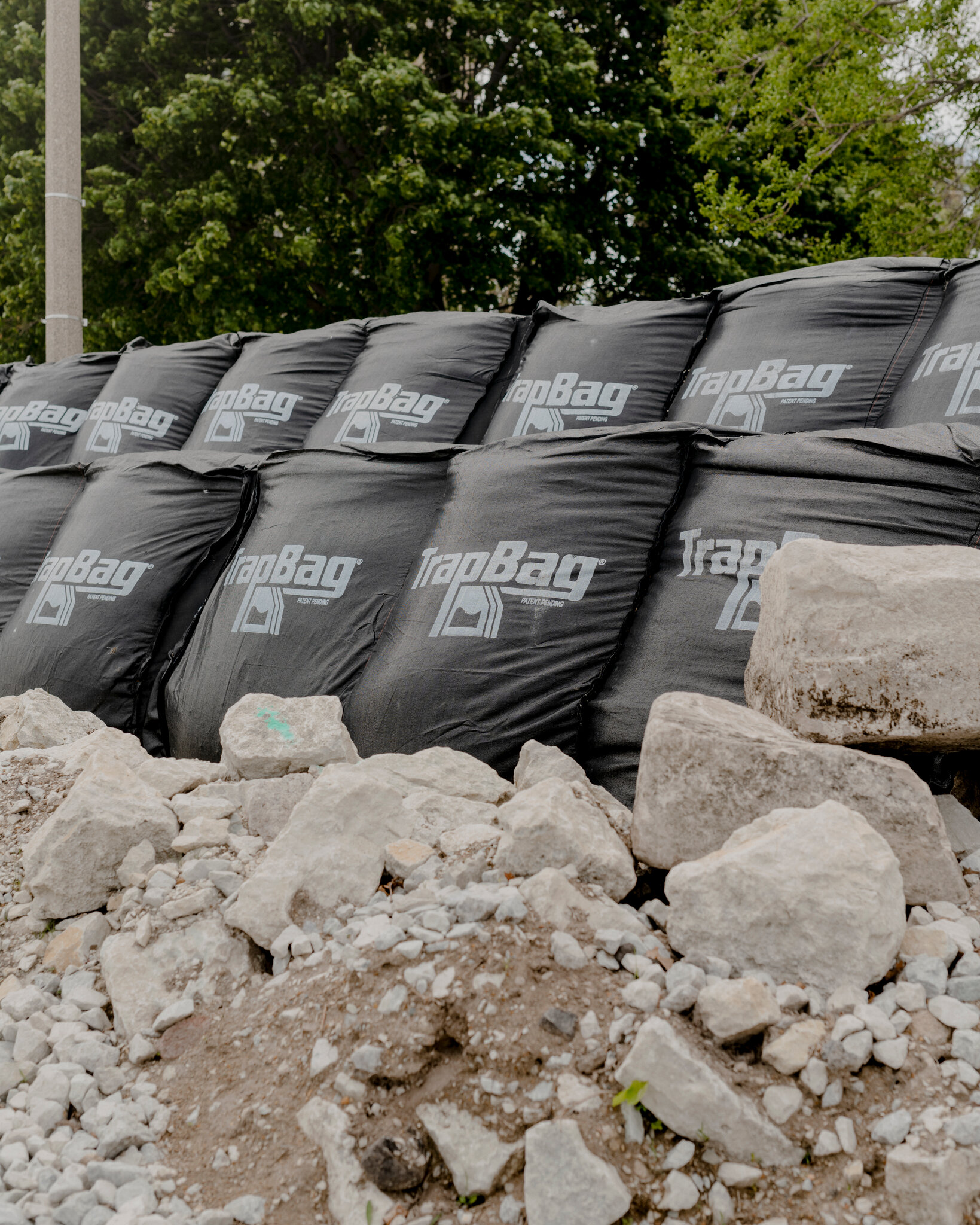 What is Riverbank Erosion?

Riverbank erosion refers to the bank of a river wearing away by the effect of water flow. While severe riverbank erosion is most common in rivers that have reached a “mature stage,” it can happen to just about any river.

All river banks are constantly eroding. This is called “fluvial erosion” and happens continuously depending on the strength of the river’s flow and the resistance of the bank’s materials.

Problems only occur during “mass failure,” when the erosion process speeds up and becomes unmanageable. A riverbank can experience mass failure when the weight of its banks becomes too heavy for the soil to support, resulting in complete collapses throughout the river.

You can notice if your riverbank is eroding through a few tell-tale signs. Firstly, if large sections of the riverbank collapse and create a steeper drop to the river, you know you have high-scale erosion. Also, if the tree’s roots near the riverbank become suddenly exposed.

Riverbank stabilization is the process of protecting a river or stream bank from erosion. Because most natural soils and clays on a river’s edge (especially for older rivers) aren’t strong enough to support the bank’s weight, stabiliztion is required to prevent the riverbank from collapsing.

Of all the river bank erosion control methods for keeping riverbanks intact, the three most common are hard methods (walls and rip rap), soft methods (vegetation), and geotextile bags.

Hard methods for river bank stabilization methods involve creating more robust structures and materials to hold the riverbank in place. The most common is rip rap, a large dump of rocks along the river’s edge to prevent the water from eroding the bank. Using rocks to prevent erosion with a concrete retaining wall to make it more effective with Rip rap.

Planting trees and other vegetation along the riverbank can also help strengthen the soil. The roots will make the ground more tightly packed and support beams when the weight becomes too much.

Geotextiles and geotextile bags are both stabilization systems for rivers , most commonly involving bags filled with solid materials to strengthen a riverbank. The bags can be filled with many materials, from sand to concrete, and can be temporary or permanent depending on the material you use. Geotextile fabric can be utilized in conjunction with other stabilization methods to further improve the riverbank’s strength. 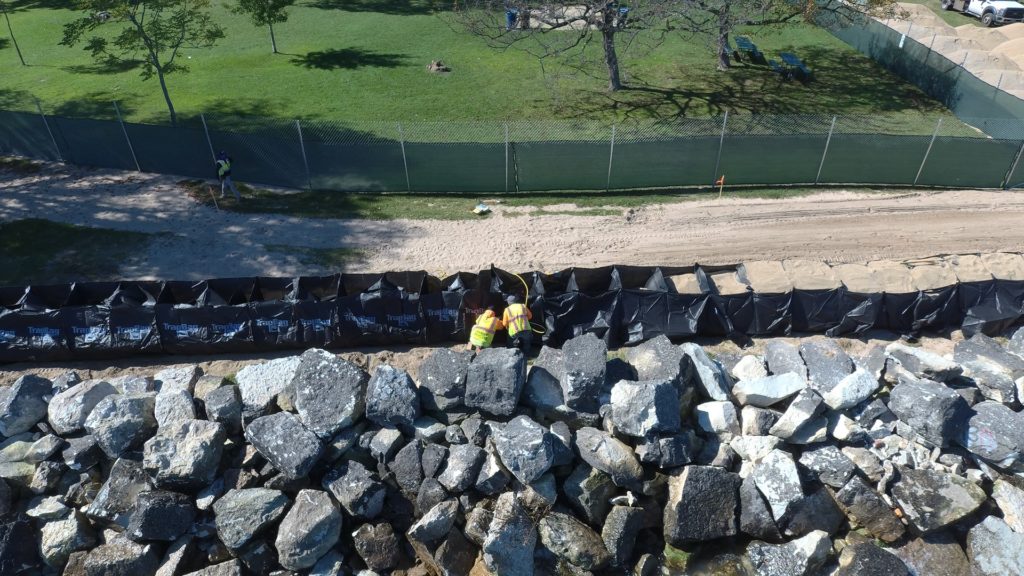 As we mentioned before, rip rap river bank protection is a collection of water-resistant rocks and stones placed along the river’s edge to prevent the river’s flow from destroying the bank. Now we can go into more detail about it and its installation process.

What is Rip Rap?

Rip rap is when you place large or small rocks on a river’s edge to prevent erosion.

How to Use Rip Rap

The rocks are usually around 4 inches to two feet long. Municipal engineers place them along river edges but also under bridges and dams to prevent erosion. For stronger rivers and larger embankments, engineers will need to employ larger rocks.

How Does Rip Rap Work?

The rocks hold up the soil on the sides of the river, so it doesn’t collapse under its weight or from the river’s flow.

Usually, the space between the rocks is filled with either soil or smaller rocks. This allows the bank to remain strong even when the river floods. Normally, the soil would be susceptible to collapse if the material isn’t strong enough.

Advantages and Disadvantages of Rip Rap

There are several Rip rap advantages and disadvantages. While rip rap certainly works to prevent erosion, it has its pros and cons compared to other methods. 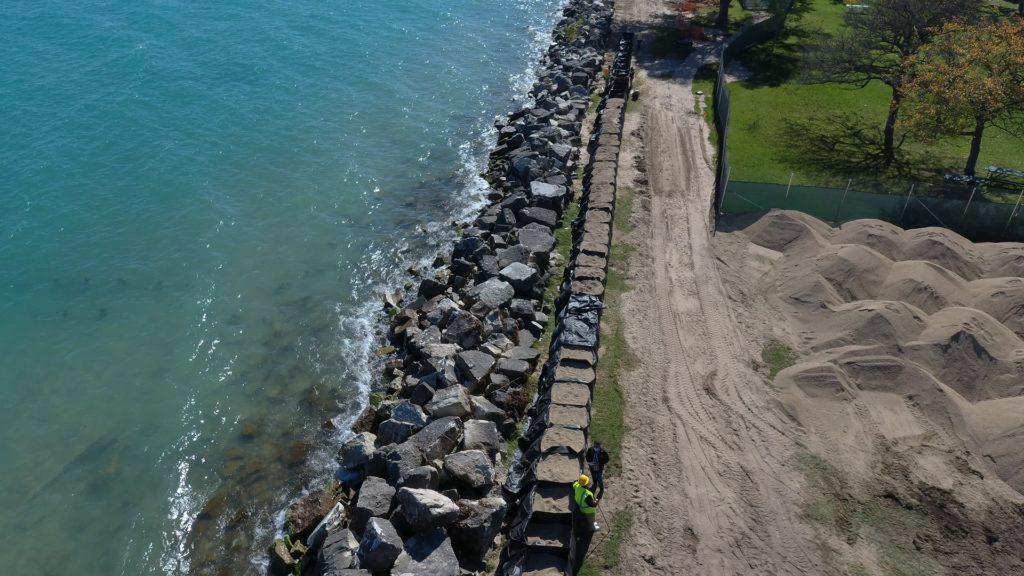 Now that you know how to stop erosion with rocks, you should apply specific criteria to your riverbank to find out if it’s a suitable method for you.

The slope and bank steepness will affect which method you use to protect it. While some banks can have a one-tier system, other steeper banks will require multiple levels of rocks or other methods to keep them safe.

If you have an especially strong river, then you’ll need stronger materials to contain it. Either larger rocks, stronger plants, or more geotextile bags will be necessary for powerful rivers.

Geotextiles are the most versatile material for stabilizing a bank. They are made of different materials and vary in strength, so there is an option for every soil. Combined with a rip rap, they can work with very steep banks and powerful rivers.

TrapBags for Riverbank Stabilization and Protection

If you’re not sure about rip rap, then you can try geotextile TrapBags to stabilize your riverbank.

TrapBags are geotextile bags used for riverbank stabilization. You can fill them with many different materials and stack them on a height or incline.

How Can TrapBags Be Used Along Riverbanks?

You can use trap bags along a riverbank by identifying a weak portion and using the bags to reinforce it. Stacking the bags along the bank and covering them in the sediment will keep the river’s natural banks safe from the water’s erosion.

Trapbags are more affordable than rip rap and easier to install than vegetation. They also allow vegetation to grow over them, making them environmentally beneficial.

Now let’s move on to some frequently asked questions about rip rap.

How big should rip rap rocks be?

What is rip rap made of?

Rip rap is made of natural stones, usually granite or limestone.

How expensive is rip rap?

Start Your Project Today With TrapBag

If you want to keep your riverbank protected, then begin your project today with TrapBag. Contact us today to get a quote and start saving your riverbank.